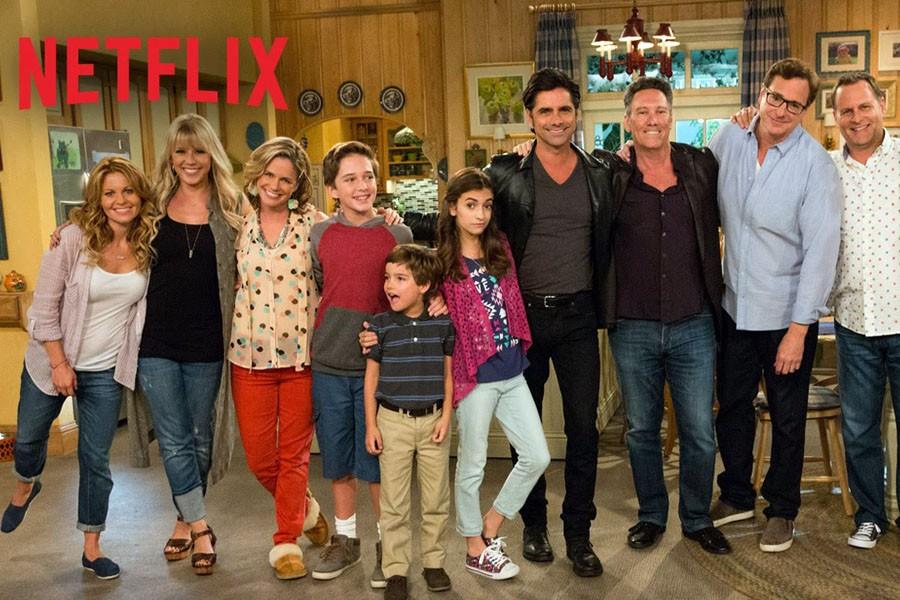 Source: Google Images The Tanners are back (on Netflix) in the Full House Reboot- Fuller House

Fuller House kicks off its first season with the unnecessary booming applause and cheers of the audience as the Tanner, Katsopolis, Gladstone and Gibbler gang enter one by one into the memorable San Francisco house give viewers hope for another timeless series. During the first episode, it was cute seeing the beloved stars from the 80’s and 90’s all grown up and reunited. But after ten minutes of most reunions, you realize why they only happen every twenty years, and why most people don’t attend (Mary Kate and Ashley Olsen).

The series as a whole is about D.J. Tanner Fuller (Candace Cameron Bure), a widow-ed, struggling mother of three, trying to raise and provide for her children. The first episode reunites most of the stars under the roof of the Tanner household, as well as some new faces. After the family talks, it is decided that Stephanie Tanner (Jodie Sweetin) and Kimmy Gibbler (Andrea Barber) stay back to help D.J. out, just as Jesse Katsopolis (John Stamos) and Joey Gladstone (Dave Coulier) did for Danny Tanner (Bob Saget) in Full House.

The first few episodes of the series were rocky to say the least. The acting equates to that of a poorly written Disney Channel show. Despite this, it reminds those who grew up from 1987 to 1995 when it first aired, and those who continue to watch it on Nick at Nite of what it was like for them when they were kids. The more PG-13 rated humor of Fuller House gives this new series a more modern feel and caters to an audience who watched the original series when it first aired.

Fuller House puts a greater emphasis on the adult’s story line and much less on that of the kids. This, however, does not stop the children from stealing the show. It is different from the original in some aspects, but still shares a lot of the same cheesy jokes and makes reference to episodes from Full House. The timing of this series could not have been better for the kids of the 90’s who grew up with the show and are now starting to have children of their own. They are now experiencing for themselves the same walks of life as the stars of this new series.

This new series was filled with a lot of cheesy, head lowering humor, and in the beginning, it raises question to why the original was loved by so many. The acting in Fuller House can only be described as cringeworthy. The most noteworthy acting gig any of the actors received after Full House ended was airing in a yogurt commercial. It is apparent why most of the stars jumped at the opportunity to act in yet another poorly written show by Jeff Franklin.

Aside from all of the shows negative qualities, it wasn’t all bad,and at one point, it became sort of addictive. It was enjoyable seeing stars from Full House grown up as well as the adorable new additions. People of all ages are able to watch this show, and it is a cute loving show for the entire family. The show was spiced up by incorporating new characters as well as bringing back old minor characters. Fuller House is a modernized version of the original, and it makes it more relatable to today’s generation. The show reboot has also rebooted careers. Sweetin in a People’s Magazine interview talked about her drug addiction. It was announced that Sweetin will be a contestant on the next season of Dancing With The Stars. This comes just days after the release of Fuller House.

Love it or hate it, the announcement of a second season was made on the Fuller House Twitter page and will be coming soon.