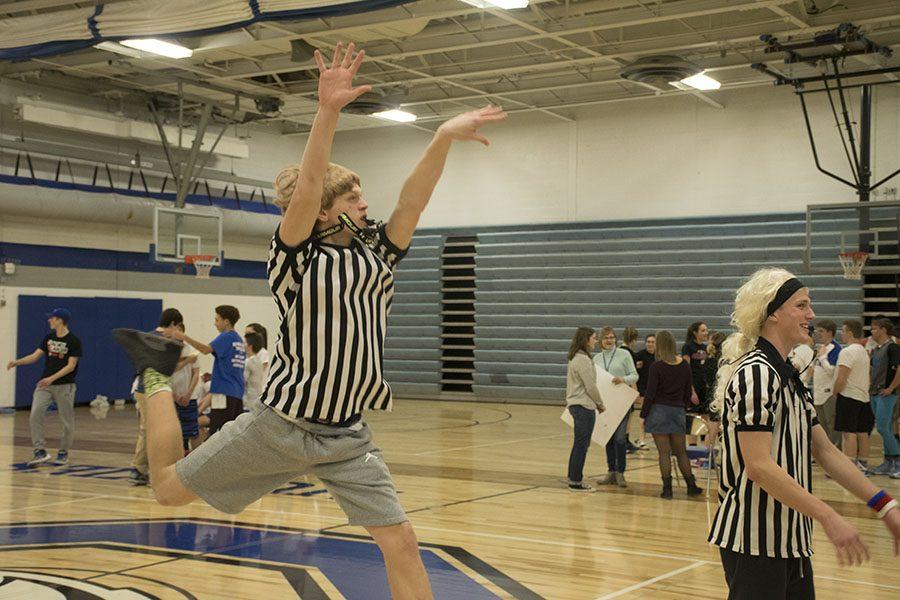 Ref Williams warming up before his game

There were some amazing shots as well as some sad shots at the Owatonna High School Wednesday night. The Murley Ball tournament was back in action in the OHS gymnasium after a two year drought. Throughout the night we saw ex-players, all-stars, men amongst boys and even some girls and guys you didn’t know played basketball. There were seven teams competing for the title of 2017 Murley Bball Champs. We saw some underdogs and some crowd favorites. The competitive nature was fun to watch all through the night, and this showed in nearly every game, making it a great night for some basketball.

Early in the night some heavy contenders that were playing like they knew what they were doing. Team Sad Knees, made up of some highly talented seniors, looked very sharp beating the senior girls by a score of 66-2. “I was expecting nothing, but the best tonight, and that’s what we have,”  said senior Jake Menden. Team Sad Knees ran a very effective press created by Dean Walters. Their press emphasized on trapping the ball, forcing bad passes and rushing the other team’s shots. Walters ran this press during his time coaching the OHS 9th grade boys basketball team and created havoc around the big nine with it.

The Pirates also looked strong throughout the night. Their strength lead them to clinch the title at the end of the night. The team’s chemistry was exceptional, making plays that looked as though they were a high level team. Team captain senior Abukar Fakrudin, said, ”My team, we practice hard, day and night, and whoever wants to see us can see us again”. The other team that placed third was the Steam Team. This was the junior boy’s team coached by “Doc Schuster 1”, Alex Raichle, and “Doc Schuster 2”, Nolan Malo. This team played hard and showed flashbacks to its 30-2 record season in 9th grade. The team was ecstatic after Dawson Leer hit a full court shot at the end of regulation to tie the game. According to the scorekeepers the game was tied, but unfortunately for the Steam Team,  after lots of talk the gym realized that the seniors were actually up 4 points and not 3, giving the seniors a trip to the championship game.

The night was extremely fun for everyone involved. Senior participant Samantha Schuster said,“The experience was life changing in one or two words, I’m not sure if it’s one or two.” Each team brought their A- games.Menden stated, “We have seen great competition, included a lot of aggression from Ivette Torres and Sam Schuster, both great, great opponent’s”. This event was a great addition to this year’s snow week. Senior Aidan Buryska said, “It really enhances the week. It’s my favorite part, I wish we could have a league because it’s so fun.” Earlier in the year, a push to reinstate Murley at OHS was met with a no.  Despite this being a school favorite with high student diversity in participation, OHS Activities Director Ryan Swanson cited scheduling conflicts for the gym.

The gym was full of excitement on Wednesday night, and the memories for these talented teams will never be forgotten. This year’s murley ball tournament is one that will go down in history.