Banking on the Huskies 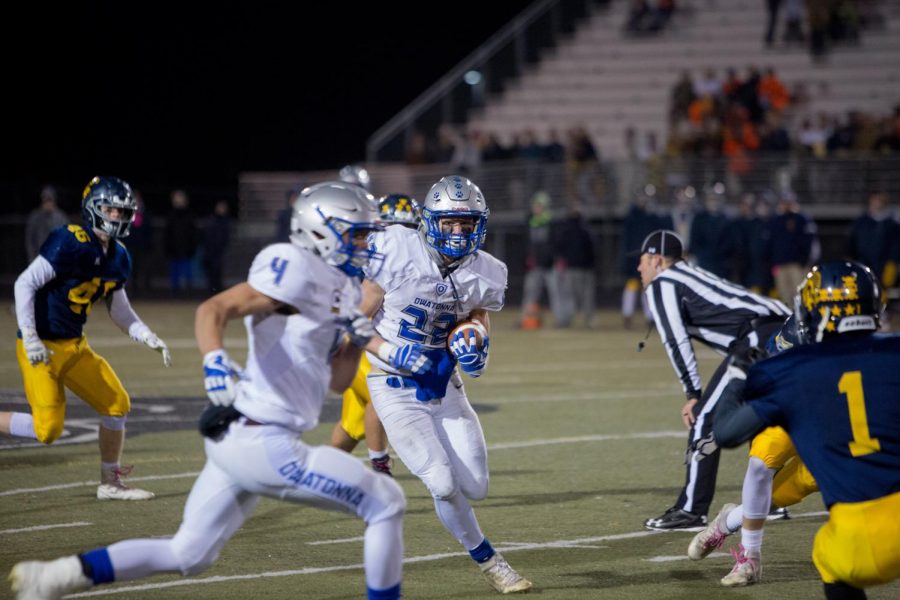 As the crowd cheered and the clock struck 0:00, the Owatonna Huskies knew they had secured their spot in the Minnesota Section 5A State semifinals. For the second year in a row, the Huskies will be returning to US Bank Stadium in Minneapolis.

The fans rushed the field in celebration and all around were smiles. This spot was earned, as senior Said Abdullahi put it, “This is the process. We trusted the process.” The Owatonna Football team has pursued through adversity to make it to where they are now. The Huskies are returning to their rightful home for the fourth time in six years.

The quarter-final game was controlled by the Huskies powerful offense. Which was headed by junior Jason Williamson who had a total of seven touchdowns earning himself a spot in the state record books on mshsl.org. Williamson also had an interception late in the game to help ice the lead and bring the ball back to the unstoppable offense. Senior Noah Budach also had a receiving touchdown to help the Huskies on their way to victory. The Huskies beat the Mahtomedi Zephyrs in a 59-34 sloping victory. Senior captain Zach Mensink had this to say about the Huskies victory and returning to The Bank, “It means so much, we’ve worked so hard. It’s great to see how our dedication payed off. It was a good game.”

With this win,  the Huskies will be returning to US Bank Stadium for their second consecutive year. Head coach Mr. Jeff Williams said,had this to say on returning the the ‘Bank’,” It’s awfully cool to make it back to the bank. We’re not worried about the next two games we’re just focusing on the next one.”  The Huskies will challenge Brainerd in the semi-final round which will be held on Saturday, Nov. 18 at 7:00 p.m.  This is not the first time the two have squared off in a high stakes game. OHS met Brainerd in the 2013 State Championship coming out on top 24-0 and bringing home a state title. Coach Marc Wiese said this, “It’s a great accomplishment to make it there. As a team with a bullseye on their back to keep going day in and day out. We’ve passed and ran well, and it only gets more fun from here.”

The team in total has 31 seniors who have helped them progress to the point they are at now. With plenty of experience on and off the field it has helped the team move on deep into the postseason. The team has not yet accomplished all of their goals though, senior captain Mitchell Wiese said this on what it felt like to win in the quarter-finals, “It feels pretty good. We’ve met our goals and all we need is one more (win) and we’re there.”

The Huskies will have to face a very good Brainerd team with a record of 9-2.  But with a powerful run offense the Huskies will be a tough team to beat.