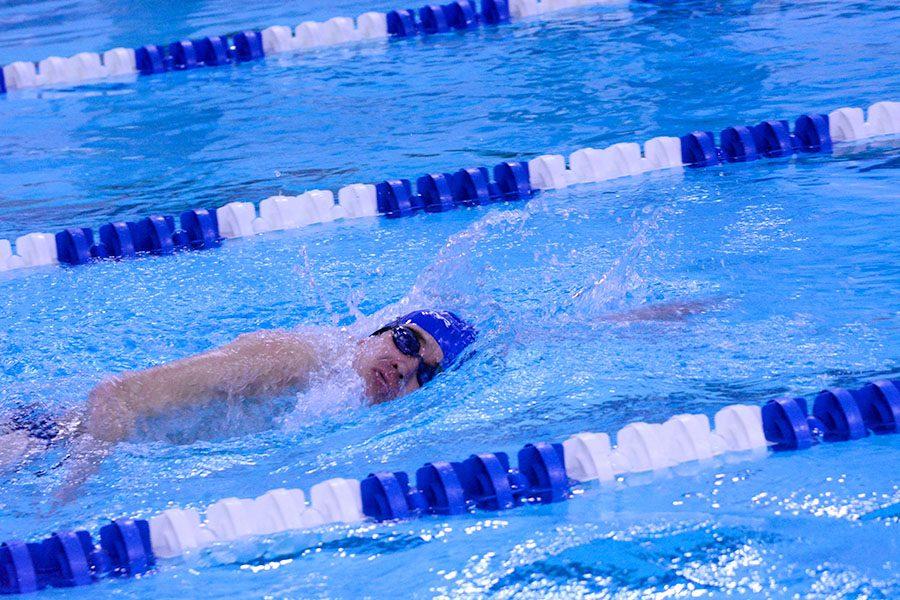 Getting right into things the swim team is ready to dive in. Head Coach Peter Rhodes has his eyes on improving his team. He said, “We always strive to get faster from beginning of the season to the end as well as to win more dual meets than last season.” Another goal is to develop the younger swimmers throughout the season for years to come.  Rhodes said, “I am looking over and revamping our workouts to add in some things we were missing in an attempt to make us stronger.” The Huskies only lost one senior last year, so they will have a strong team going into the season. When Coach Rhodes was asked who are key players, he said, “Ben Stelter, Josh Belting, Nick Sande, Spencer Steckelberg and Evan Steiger are our seniors this year and all will need to step it up as well as Payton Jorgenson, Colton Kamholz, Logan Steckelberg, Caleb Belting and Fletcher Schulz.”

Senior captain Ben Stelter is pushing the swimmers to success this season as well. When asked how he has prepared for the season, Stelter said, “To prepare I have been swimming in the offseason at Mankato and in Faribault all summer and some of the fall. I also helped host captains practice to better acclimate myself and mostly the other swimmers on the team.” With many varsity returners ready to compete, there are a few open spots that will be determined as the year goes on. Some main goals for this upcoming season is beating Faribault in the dual meet. Also, in the section final meet, the team has its eyes on placing  someone in each event. As always, the goal of getting faster and improving is at the top of the list. With the new season, there are many new swimmers which brings a sense of excitement onto everyone, and with lots of depth on the roster, the program is set for the future.