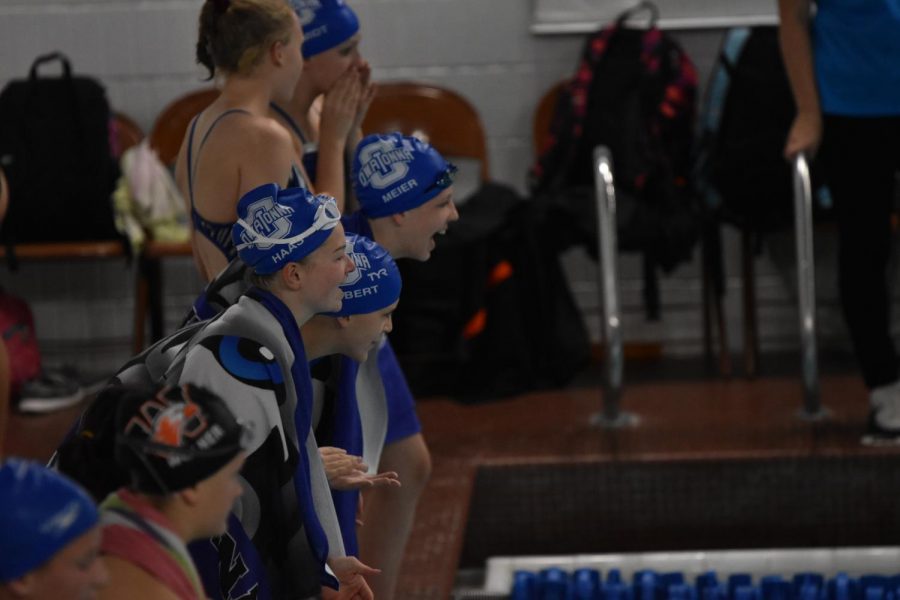 Emily Haas cheering on her teammates from the deck

Junior Emily Haas is a swimmer for the OHS Girls Swim team. She joined the swim team in the beginning of her freshman year, and her favorite event to swim is the 50 freestyle. The past three seasons have been filled with Haas training hard to beat her previous times, and working to get new personal bests- like the rest of the team. However, Haas has right side hemiplegia which affects the control of muscles on the right side of the body.

Haas developed hemiplegia from a brain tumor from when she was younger. The swimmer’s wrist is paralyzed, which prohibits her ability to open and use her right hand. Haas said, “I can’t do things people can normally do with two hands.” Additionally, her hips are uneven which causes limping to occur when she walks. Haas wears a brace daily for stabilization and keeping her leg straight which helps prevent tripping when she is walking.

Swimming does have its challenges for Haas specifically when competing for events using the butterfly stroke. The double arm stroke is challenging for any swimmer, but even more for Haas as she is only allowed one arm for the event. If Haas uses her right hand, she automatically gets disqualified. Backstroke also gets difficult for her due to her right arm not being able to fully rotate behind her back. At practice, Haas trains with modified sets made by the coaches, so she gets the most out her workouts. Head coach Isaiah Fuller said, “We’ve got to problem- solve a little bit. There are some things that she just physically can’t do, so we have to figure out what works best for her.” This year the coaches have been working on modifying Haas’s starts, so she can get the most distance off the block for each race. Despite the obstacles that swimming offers, Haas’ determination pushes her through competition and fighting for personal best records.

Outside of swimming, Haas is also involved in Marching Band, 4-H, Pep Band, Choir and Taekwondo. She has also tried many other activities and sports, but has always loved the way the water has made her feel. Swimming is more comfortable for her than any other sports, because of how the water helps glide and move with Haas’ body. Haas said, “I like swimming because you get to beat your own time and not compete against anyone else.” Whenever she competes, she thinks about what she can do better as well as trying to beat her previous times, and she is motivated by her teammates cheering her on at every race. Her mom Cherie Haas said, “It makes me happy to see that everyone is supporting her.”

Emily also took her passion for swimming outside of the nation when she visited Spain to compete over the summer. She was invited by other athletes with disabilities who are involved in adapted sports. Haas said, “The fun part was that I was the only U.S swimmer on my team. ” Haas thought the best part of the experience was getting to compete in events that she usually does not swim. Along with competing, she toured all around Barcelona, experiencing the culture and environment of Spain. Haas said, “ The whole experience was amazing.” Haas’ teammates back home were cheering her on from the U.S., sending her pictures with colorful posters they made to motivate her.

Emily has made great improvement throughout the years of her competing for the OHS Swim team. The best part about watching Emily swim, for her parents, teammates and friends, is seeing the improvement she has made, as well as seeing her set goals and beating them. Assistant coach Brianna Luhman said, “I enjoy coaching Emily because she works hard and never gives up. We are excited for her and the progress that’s happening.” Emily’s determination and diligent training has inspired her teammates along with her peers to never give up and to work hard. After finishing her high school swimming career, Haas plans to swim for relaxation and leisure.