Huskies make history with back to back championship titles

A battle of defense 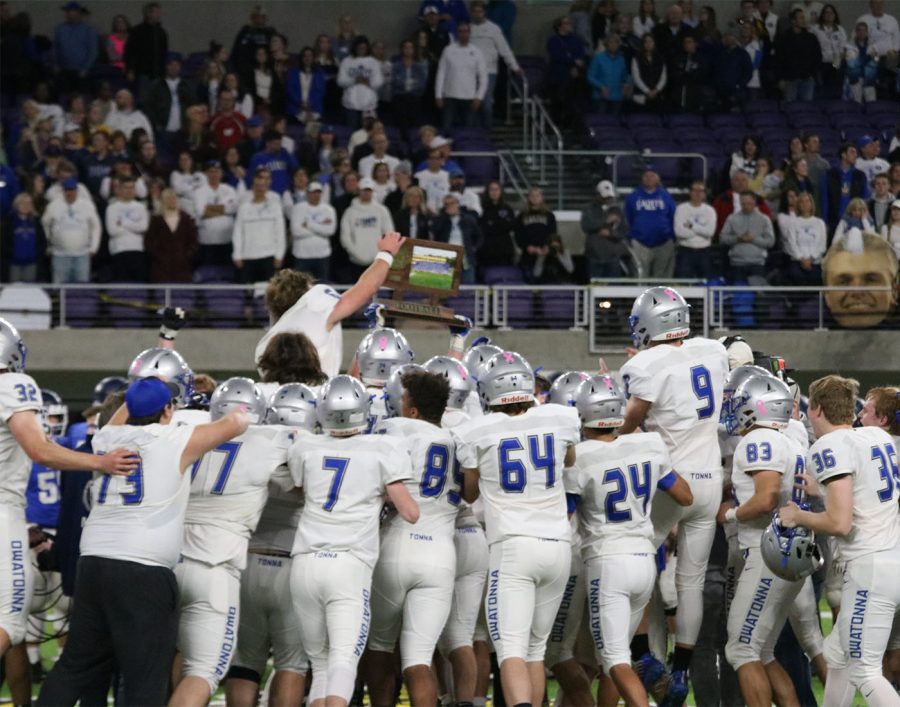 On Saturday Nov. 24, 2018, the undefeated Owatonna football team went into US Bank Stadium hungry for another win. The Huskies left US Bank stadium undefeated and with a second consecutive class 5A Championship title over the St. Thomas Academy Cadets. In the first half, the Huskies didn’t score and held St. Thomas to only a field goal. Owatonna went into the locker room trailing 3-0 at halftime. The Huskies kicked off the half, but when they got the ball back, senior captain Jason Williamson ran 71 yards for a touchdown, breaking several tackles along the way. Although the Huskies were leading 7-3, it was still anyone’s game until Williamson ran 44 yards for another touchdown with 1:27 left in the game. The Cadets got the ball back, but got sacked once by senior captain Joseph Stransky and once by junior Ethan Rohman in back to back plays. The game clock hit zero; the Owatonna Huskies were victorious once again, winning 14-3.

When the Huskies came back onto the field for their second half warm up and pep talk, the team heard, “This is your chance to make history.” This referenced the prospect of being back to back champions. Williamson said, “We all worked really hard for this. We’ve been telling ourselves this for a long time, and to actually do it is surreal.” Despite most of the team being here before, this state championship title means a lot to each of the players. Junior Solomon Havelka said, “For me personally it’s a lot more special. Last year I had to watch my brother do it, and that’s emotional by itself.  Now having him up in the stands, congratulating me.”

It was argued that Owatonna and St. Thomas Academy were more alike than different. Both teams have an elite running back and strong defense. The Owatonna defense held St. Thomas Academy, a usually high-scoring team, to just three  points. Stransky said, “You just have to believe in the guy next to you. Hopefully, he does his job and you do your job.” Trust has been a big part of this this season. Because there were more juniors than seniors, the latter had to trust the younger players to execute. Head coach Jeff Williams said, “The seniors were really good to our juniors, allowed them to play big roles in our team this year, and we were able to supplement and get two teams that were pretty talented together.”