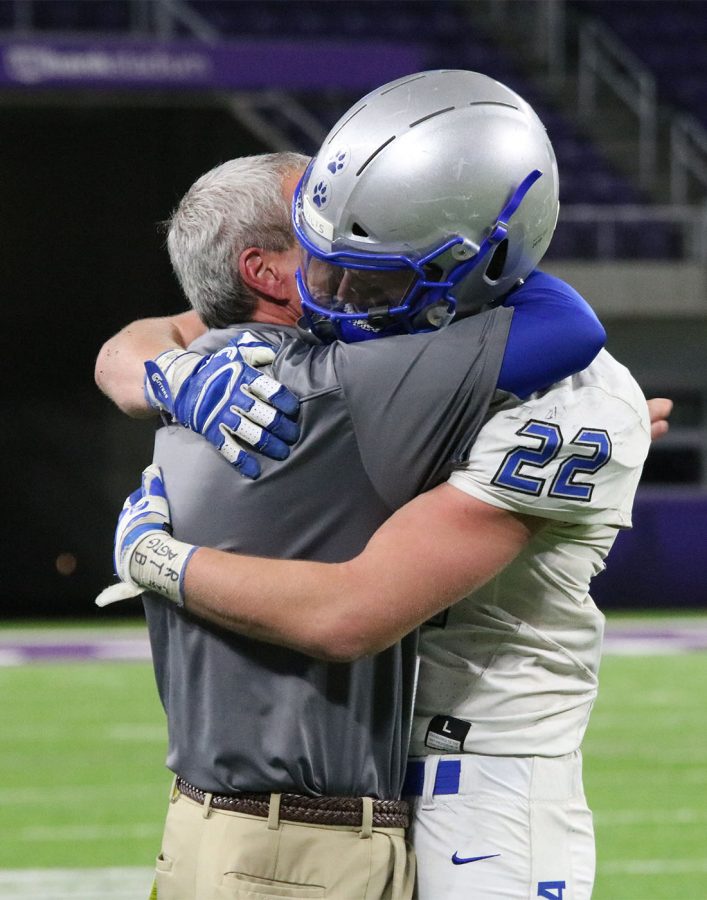 An emotional moment between Jason Williamson and Coach Williams

The Huskies have earned much more than another state championship title. Coach Williams won the Vikings’ Don Shula Coach of the Year award. With that honor, he will be recognized before the Vikings game on Dec. 16 and get to go to the Pro Bowl in Orlando, Florida. Senior Zander Johnson received the Most Valuable Teammate award, which is given to players that exude sportsmanship and put the team first.

Williamson a record-breaking number of touchdowns with 110. He is a Mr. Football finalist which will be revealed on Dec. 16. He and senior Chris Lewis are already on the All-State team. They will play in the All-State game on Saturday, Dec. 15 at 1 p.m. at US Bank.  At the conclusion of the game, Williamson ran and hugged coach Williams. Williamson said, “He is the entire reason I’m in the position I am right now. Giving me a shot to practice with him as a freshman, having the confidence in me to play as a sophomore. I just owe everything to him.” When this was said in the press conference, Williams threw his head back and laughed. He didn’t miss the opportunity to remind Williamson of his talent, saying, “It was important to have Jason be able to walk off the field one last time victorious. He’s finished his season three years in a row at US Bank Stadium, twice with state championships. The kid deserved to walk off to the ovation.”

There are 20 seniors graduating this year. As far as varsity starters on offense, the team will lose kicker David Keller and tailbacks Mason Oland and Williamson and fullback Johnson. They will lose wide receivers Matt Segler, Ben Zappa, Jake Miller, Mason Rhodes, Cole Deason and Noah Brandt. On the offensive line, the Blue Collar will lose Joe Edel and tight-end Eli Tellijohn. On defense, they will lose defensive linemen Lewis and Stransky, as well as linebacker Nick Staska.  The returning seniors have two year record of 25-1 and have made history earning back to back state titles.