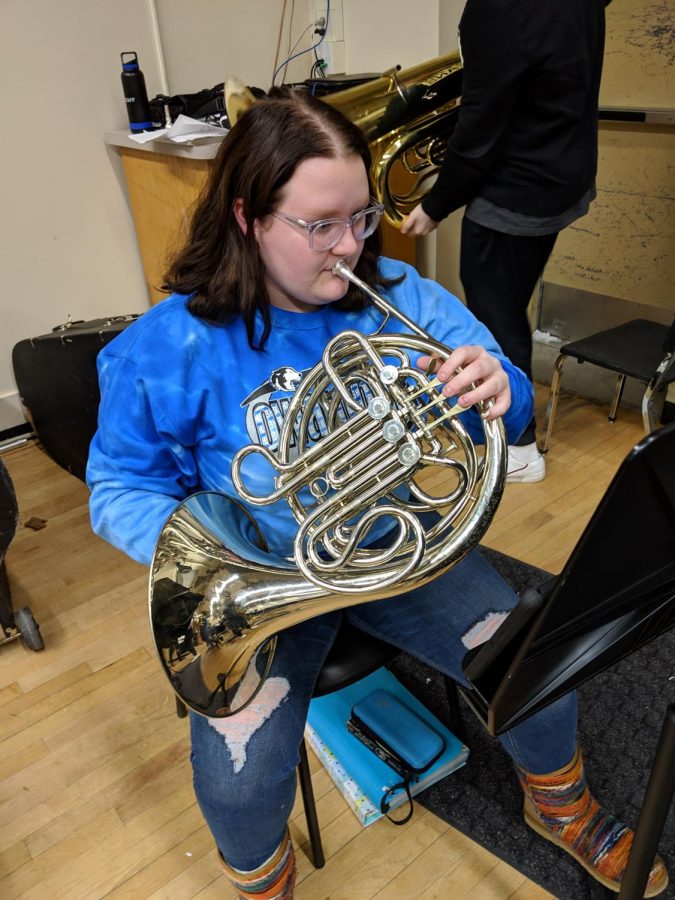 Hard work and determination are some of the words that describe sophomore Elise Egbert. A typical day in Egbert’s life is very busy, juggling her classes, job and extracurriculars. She devotes most of her time to music, as she is involved in: Concert band, Concert Choir, Jazz Band, Marching Band and the winter percussion ensemble. Egbert works at MK music repair in downtown Owatonna where she cleans and repairs brass instruments. If she does not have any activities after that, she will practice her french horn and trumpet. Egbert said, “Sophomore year has been pretty smooth sailing, other than the stress of having a lot going on.” Compared to past years, she has been extra busy preparing for honor band auditions, solo ensemble, and the Mary Poppins musical.

Egbert is multi-talented in the world of music, as she plays first chair french horn. In addition to being skilled on the french horn, Egbert can play the trumpet very well. Concert band teacher, Mr. Peter Guenther said, “Elise possesses a lot of musical skill, but she is also very humble about it. She is constantly a learner, and I think that is one of the things that I admire most about her.” Egbert participated in Solo Ensemble for the second time in her high school career. She played in the brass choir, brass quintet, woodwind quintet and her own solo. Egbert put hours of practice and preparation into each piece she participated in. All of her work and practice paid off, as all of her events earned Superiors, along with her solo getting a perfect score and Best in Site. Only two other soloists in band took home a perfect score this year.

Freddie Mercury, the lead vocalist of rock band Queen, is one of the people that Egbert has always admired. Egbert said, “He was never afraid to be himself. He changed people’s lives and broke the status quo.” She thinks music education is important, as it gives kids an outlet to express themselves in a different way. Egbert said, “Music gives me the ability to create something beautiful that I can share with others.” She also thinks that introducing music to kids is important as it leaves music as a key aspect in their lives, making it last and evolve in younger generations. Egbert plans to go to the University of Minnesota to major in music performance of the french horn and minor in actuarial studies. She aspires to perform for movie scores in the future. She is also interested in traveling the world to play in professional orchestras.