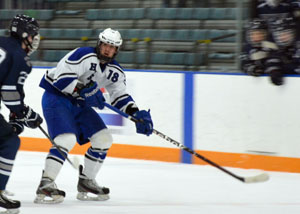 The Owatonna boys hockey team beat Rochester Century 6-3 Thursday night. The Huskies lost to Century 2-4 earlier in the season. The scoring started early for the Huskies as senior captain Soren Colstrup scored early in the first period. Senior Peter Hanson led the Huskies in scoring with two goals on the night. Hanson said, “The game went really well. We got that first goal and it gave us momentum on offense and defense. Everything started clicking in the second period. We had good all-around communication.” On Saturday Feb. 1 the boys travel to Mankato East. Hanson said, “We’re expecting a win, but we can’t go in over confident. We just need to play our game and hopefully, come home with a win.” The game is at six p.m. at the All Seasons Arena.