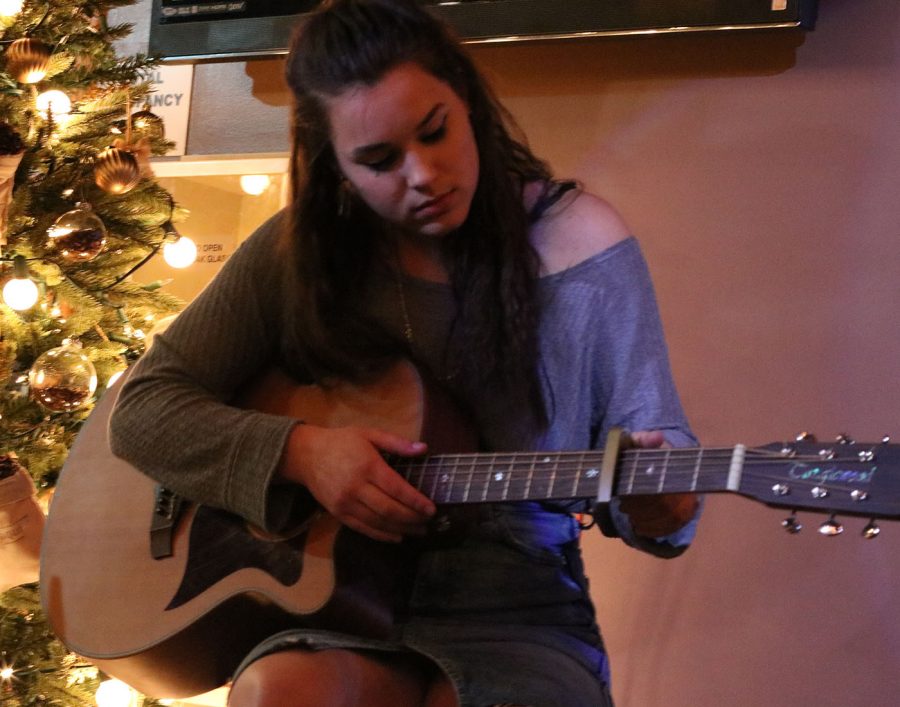 Izzy Melgaard plays and sings at the Art Splash

Star of the show, lead singer, skilled musician and a charming personality, junior Izzy Melgaard does it all. She got her early start from her musical family. Her parents have always surrounded her with music and her mother sings day and night. Melgaard said, “Music has always been a part of me since I was really little. In eighth grade, my friends dared me to try out for a play, Wizard of Oz, and I absolutely fell in love.” Ever since Melgaard’s love for performing was born. She not only acts, but has been singing since 2nd grade, and plays several instruments including the piano, ukulele, and the guitar has always been her personal favorite. She has also been encouraged by adults, such as theatrical director, Mr. Erik Eitrheim. Eitrheim said, “Izzy is a great mix of great talent and fantastic work ethic. She takes her job as a performer very seriously and works extremely hard to make her performance, and any show she is a part of, the best it can be. She looks at the challenges put before her as just that – challenges to be overcome.”

Melgaard was placed in the role of Mina in the play Dracula, the first production of her freshman year. Melgaard said, “I thought it was really cool and I was very open-minded and I didn’t know what to expect.” Sophomore year, Izzy snatched up two lead roles, the first being the classic Juliet in the show Romeo and Juliet. The second being the timeless story Aida as the main character Aida. For some, landing major roles might inflate their ego, but Melgaard’s perspective of theatre remains the same and she still loves each part equally. Melgaard said, “I didn’t expect any of it, I was really at peace and focused on how I could constantly improve and bring the cast and crew together.” Junior year, Melgaard starred in the timeless role of Mary Poppins in the winter musical. She also displays her talent at places like free art shows or at coffee shops. In terms of her future, she plans on continuing working with shows at OHS through her senior year and doing what she enjoys the most.