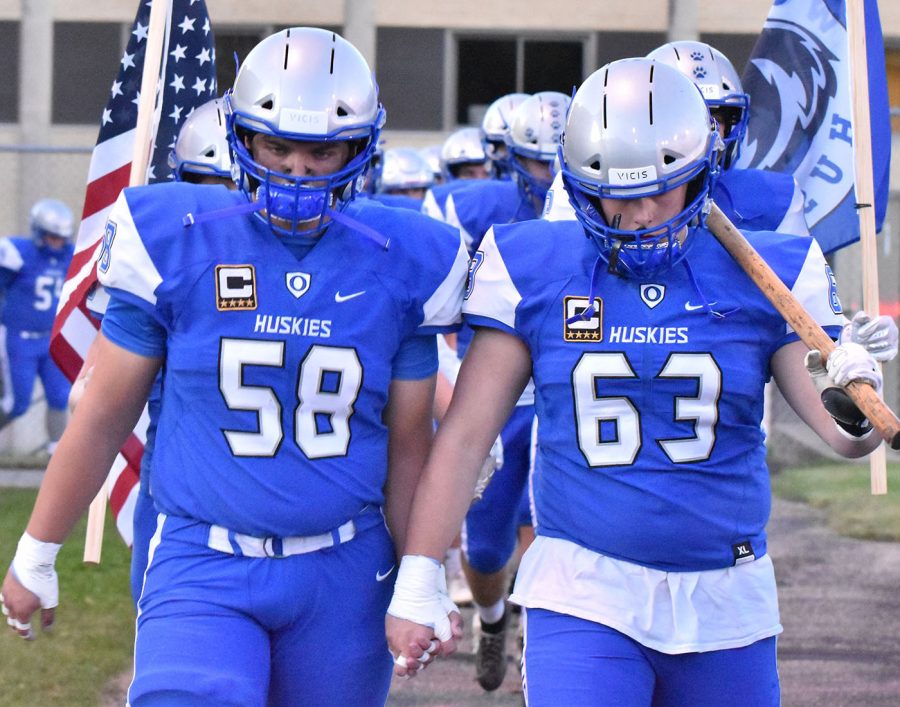 Football captain Isaiah Noeldner on the left, getting ready for football game

Senior Isaiah Noeldner is a well-rounded athlete participating in Football, Wrestling and Track & Field. Football is a huge part of Noeldner’s life, with him being a two-time state champion in 2017 and 2018. Noeldner has followed the footsteps of older brothers Jonah Noeldner and Sam Noeldner, playing the same position on another state team. He wrestles in the winter as the Huskies’ heavyweight for the past three years, and he has been wrestling with the Minnesota Storm during his off-seasons. Noeldner was apart of the 2016 state team where he wrestled at 195 pounds. Noeldner has high aspirations for the upcoming season and is gunning for an individual spot at state.

He excels in sports but has been set back due to an ACL tear deep into the winter of the 2018-2019 wrestling season. Noeldner has persevered through this and fought to regain his positions and stamina in each sport. Noeldner said, “It sucks; however, it became easier when I realized there are only two things you can control, your attitude and effort.” Noeldner is looked up to as a leader as both a football and wrestling captain. Noeldner battles and never gives up, and his teammates have recognized him for that. Noelander’s hard work and perseverance has been seen by his teammates as well as his coaches.

Noeldner is also very active in his community being a part of NHS, Link Crew and DECA. He is involved in his community and is focused on those around him while looking at community service in a selfless manner. He has participated in NHS and Link Crew for a year now and just recently joined DECA to involve himself further into social and school activities in school, as well as prepare himself for business environments after high school. He joined Link Crew after seeing the senior leaders on his freshman orientation day, this encouraged him to be a Link Crew leader to pay it forward.

Noeldner is the youngest of the three boys that were all-important role models in his life and encouraged Noeldner’s positive outlook in the community. Noeldner said, “I don’t know what compelled me to do what they did, I just wanted to be like them.” Having great role models for younger siblings has its benefits and it seems to be rubbing off on the young Noeldner and pushed him to be a great person and leader in the community.