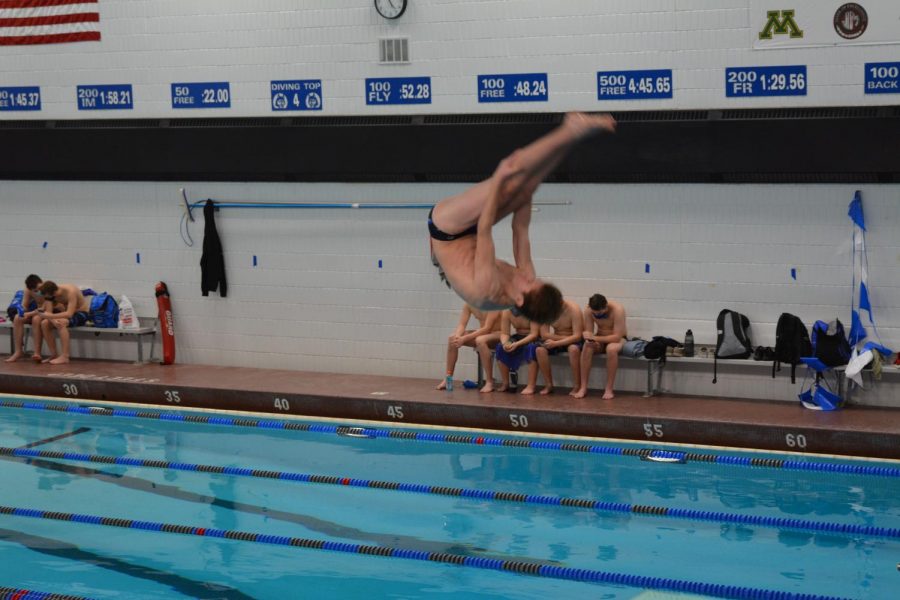 The Huskies boys swim and dive team has had a promising year. With that being said only one member of the team, Jacob Fast, qualified for state as he placed third in sections as a diver.

Fast’s ability to keep going on different dives even when struggling is what ultimately helps him succeed. Fast said, “The season was my best so far. I got first at every meet except the section meet where I was able to get third.” Jacob plans on competing very hard at the state meet and his hard work and dedication could surprise many. Assistant Coach Tara Lammers said, “Jacob has worked incredibly hard fine-tuning his dives and having great consistency. His back dive typically received a score of 7/10. And has an average diving score of 4.5.”

The MSHSL meet works rather uniquely, The top four divers from each of the eight Minnesota sections, a total of 32 contestants, will all compete in the state meet. There are 11 dives total, after the first eight there will be a cut down to 16 divers, leaving only the top 16 to complete the last three dives of their list.

The state competition took place Thursday, March 18th. At Jean K. Freeman Aquatic Center at the University of Minnesota. Jacob Fast scored in the 120 range after his first five dives which ultimately fell short of the top twenty that would advance to the next round.

This accomplishment was monumental for Fast as he dreamed the day would come this year he was able to make that dream a reality, he said, “It has been my goal since I first started diving in 7th grade so I feel very accomplished.” In his last season diving for the Huskies, Fast made it a year he will never forget.