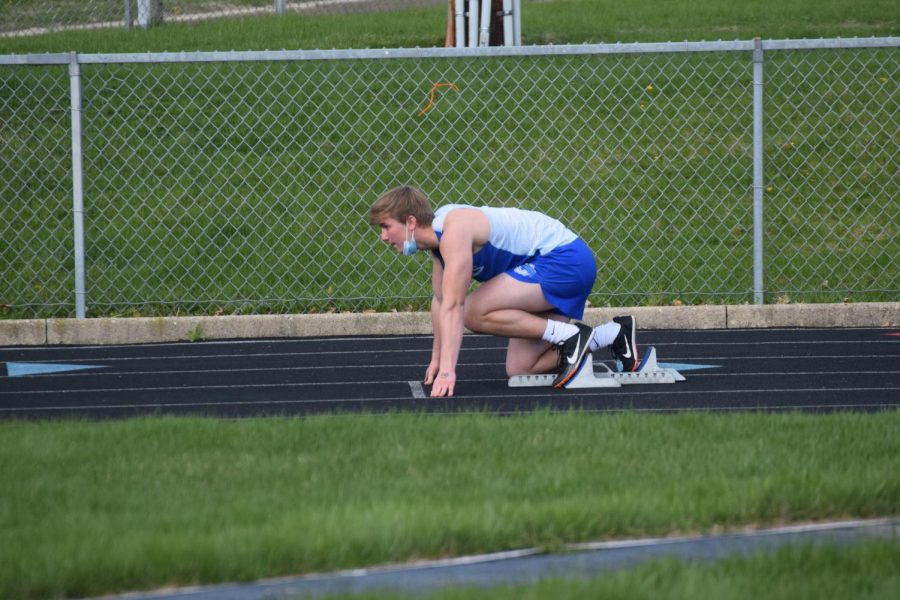 Lane Wagner in the blocks ready for the race.

The OHS Boys Track team has been on fire all season long. The Huskies have competed at eight meets this season and have won all, except for one that they took second in. In many of the meets, blowing away the competition and winning by big margins.

The COVID-19 pandemic has affected sports and canceled a lot of games. Last season, as the pandemic arose only a few days after practice, the season was postponed and later canceled. There was no high school track last year, which left many track athletes without a chance to compete until this year. Track was back and athletes were finally competing again.

One aspect that makes this team so special is the youth and underclassmen. This team is very young and made up of many sophomores and juniors. Senior Captain Nate Smith said, “We have a great group of leaders, and just as importantly we have a great group of learners. The seniors have taken on a leadership role and have helped the younger guys start off really well. Freshman and sophomore records keep on falling as the year has progressed.”

The Huskies have had many standout athletes this year. Sophomore Trevor Schirmer, who has been a standout thrower this year, won multiple meets in the discus and shot put. Another standout athlete is junior Ryan Gregory, who has posted a time of 39.97 seconds in the 300 meter hurdles. Sophomore Justin Gleason, who broke the OHS sophomore long jump record with a jump of 21 feet .75 inches. Along with sophomore Owen Korbel, who has won almost all of his meets, posting a high jump of six feet and three inches.

As a team, the Huskies have been almost unstoppable and have won many big meets against big schools. Head Coach Kevin Stelter said that some of the highlights were, “Beating Lakeville South in a Five team meet. Winning almost every other meet we have been in as well.”

The Huskies next meet is the Big 9 conference meet on Friday, May 28.