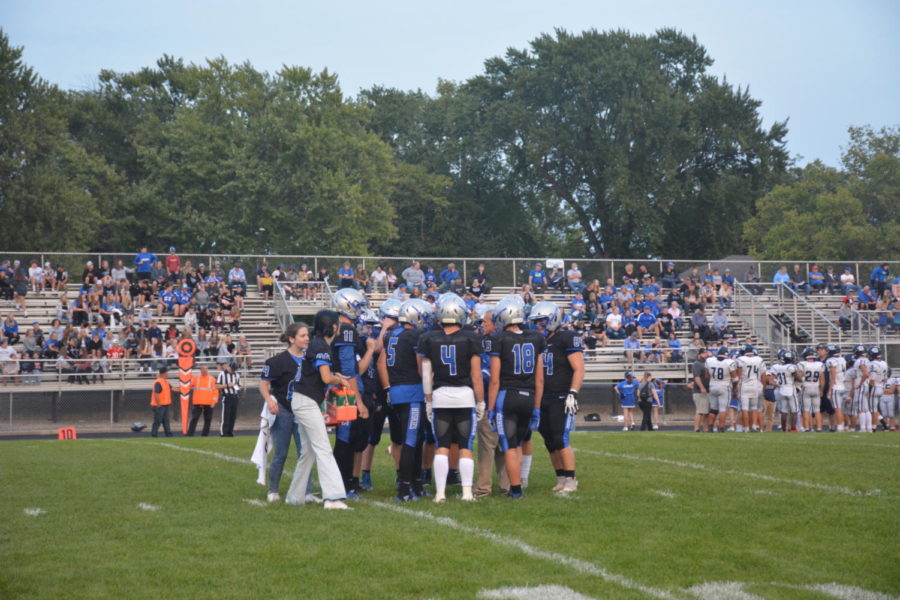 Huskies gameplan during a timeout

The 2021 football season has been a “rollercoaster ride” for the Huskies due to various injuries to key players throughout the teams’ roster. These absences included preseason all-state linebacker and team captain Grant Achterkirch, preseason all-state running back Connor Grems , starting quarterback Taylor Bogen and star defensive lineman Ryley Glassmaker.

Going into Week 4, the Huskies were 1-2 with a win over Rochester Century and losses to two deserving opponents in Rochester Mayo and Mankato West. Owatonna seeks revenge on Rochester Mayo in early November, Mayo is a likely opponent in this season’s section tournament.

The Huskies pushed to 2-2 overall after a statement victory over Austin on Saturday, Sept. 24. Owatonna won 51-7, thanks to an exceptional debut from sophomore quarterback Jacob Ginskey, he was able to find the Huskies number one receiving target Nick Williams seven times for 147 yards and three touchdowns. After the game Saturday, Senior Captain Eli Spurgeon said, “ Seeing all the guys back from injury is amazing, we were really missing them and to have those guys back is a huge confidence boost as well as a good morale boost for the team. Which is a huge part of us getting our recent wins.” With the return of those three starters the Huskies looked to finish the regular season with nothing but four new additions to the win column.

Owatonna returned to the football field in Northfield Friday, Oct. 1. They came out with another victory moving them to 3-2 overall. Huskies defense showed tremendous growth providing countless three and out drives, along with three interceptions and a sack. Final score was 26-7.

The next look at the Huskies will be in a homecoming showdown, as they take on Rochester JM at OHS on Friday, Oct. 8 at 7 p.m.