Drug-free is the way to be 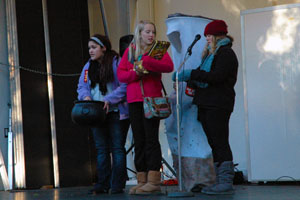 If there is one thing most school-goers will remember, it is probably Red Ribbon Week. The drug-awareness program starts on Oct. 21 to the 27. To commence the celebration there will be a kick-off during school. Booths will be set up at lunch where students can get bracelets for discounts from a variety of places. An after-school kick off will also be on the 21, starting at 5:00 PM in Central Park. The local Kiwanis Club will be providing free food and drinks; all ages are welcome.

Red Ribbon Week is officially the oldest and largest drug prevention campaign in the country, but it did not start out that way. The week was originally a community event, remembering Enrique “Kiki” Camarena, a DEA agent who was killed in Mexico during the war on drugs. Camarena lived in California, and grew up in a dirt-floor house. Working his way through college, he served as a marine and eventually became a police officer. On Feb. 7, 1985, Camarena left his office to meet his wife for lunch. Five men appeared at his side and shoved him into a vehicle. A month later, Camarena’s body was discovered in a shallow grave, tortured to death. Weeks after his death, his Congressman, Duncan Hunter, and his high school friend Henry Lozano, launched Camarena Clubs in Imperial Valley, California. Hundreds of club members pledged to live drug-free lives in honor of Camarena’s sacrifices, and others on behalf of all Americans.

Sandra Noeldner, a Chemical Health Specialist and S.H.O.C. Advisor is the head of this year’s program. When asked about the high school’s very own S.H.O.C., Noeldner passionately answered, “When I see S.H.O.C., I have nothing but respect for them. The group does not judge people, they do not want to be portrayed like that.” Noeldner mentioned that 30 years ago, OHS did not have a drug-awareness program, “Chemical use has, is and always will be something teens struggle with. There’s more help for people now. Young brains are extremely vulnerable.” Since teenagers have been using drugs for such a long time, they are becoming very well known. But now, new and highly addictive drugs are emerging. “A concern that I have is tobacco, alcohol, weed as gateway drugs, but now there’s prescription drugs.”  Alcohol is the most used among teenagers in the country, with marijuana following behind. Both substances are becoming more and more accepted. That is why spreading drug-awareness next week is so important. “Encourage people to wear red if they support the cause.” Noeldner said.

To support the cause year-round, students can join S.H.O.C. in the spring. Applications are available in TMM and in the office during April. Noeldner is also available for talking in her office, room A207