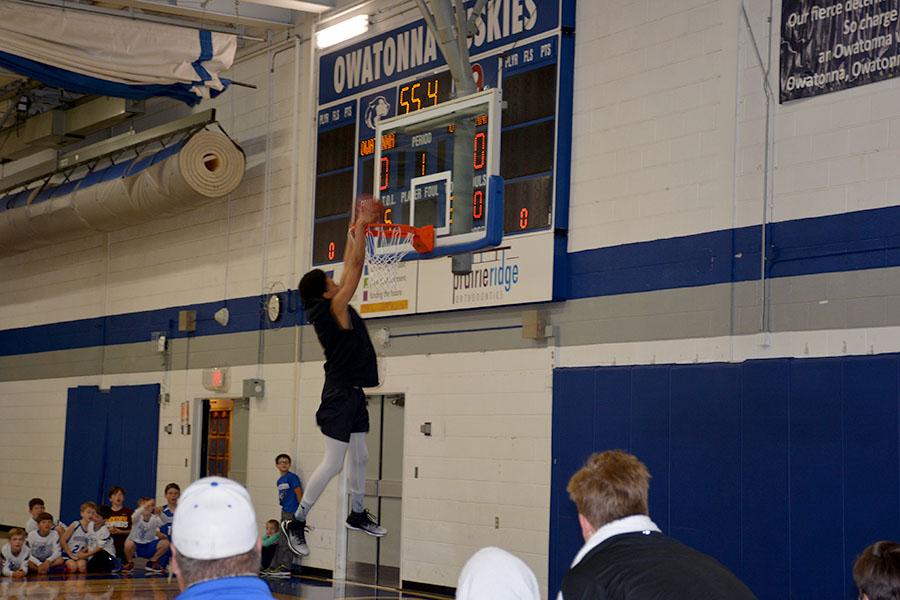 Entering this school year and many new sport seasons, the OHS gym floor suffered a setback in the result of a leak in the roof.  The only thing they could do was have the floor removed and make a brand new floor.  This was all great, but nobody knew when it would be done. This fall, there were no events held in the school’s gym, and it caused lots of stress throughout the school. This past week, the approval was given out by Principal Randall that the gym was ready for someone to take the court.  There was no better way to open the court up than to have a highly anticipated, “Husky Havoc Night.” This event was a fundraiser for the Owatonna Boys Basketball program, and also a way to showcase the talent we have on the team this year.

The Owatonna Boys Basketball team showcased a variety of players throughout this event showing off their skills.  Students saw dunks, three-pointers and the smiles of many young faces.  Assistant coach and director of Husky Havoc Night, Greg Kruschke commented on the successful night, “It was a fun night for the kids, bringing our kids and our boys program together on one court in a way to fundraise money and have some fun before the season, and also to showcase our program and the athletes we have.”

The night started with scrimmages from 4th grade to the Huskies B-squad team coached by Pat Webb and Greg Sullivan. This got many faces into the gym to see the new floor and to see the new 2016-2017 Owatonna boys basketball team take the floor at 9 p.m. for the final scrimmage of the night.  Along with all the scrimmages there was the skills challenge, won by  Alex Raichle, three point contest won by Sol Havelka, and a dunk competition won by Tri- -champions Andrew Jackson, Jason Williamson and Dalton Kubista.  Within the dunk contest, the fans saw a variety of dunks. The first dunk – a reverse one handed slam from Terrell Conner, to the final dunk – a 360 degree slam from the co-champion Dalton Kubista. Kubista said, It was pretty crazy, it was the first time I’d ever done one and I said, ‘Why not?’ So, I did it and everyone just went crazy.”  He called this winning dunk the, “Three- Sixty Daddy”.

It was pretty crazy, it was the first time I’d ever done one and I said, ‘why not?’ So, I did it and everyone just went crazy.”

It got all the young kids faces to light up, along with some ecstatic expressions from parents and grandparents.  “The younger kids really look up to the bigger boys and I think think that was evident by the excitement on their faces throughout the events that night,” Kruschke said.  The night wrapped up with the introduction of the 2016-2017 varsity team and an intersquad scrimmage.  The night overall went great and was a very fun way to open the gym floor and the 2016-2017 basketball season. While talking to the coaches of the  Owatonna Boys Basketball staff they said this event was a success and they look forward to having this fundraiser in the future.  The Owatonna Huskies will open the year this Friday at the OHS against the Albert Lea Tigers at 7 p.m.