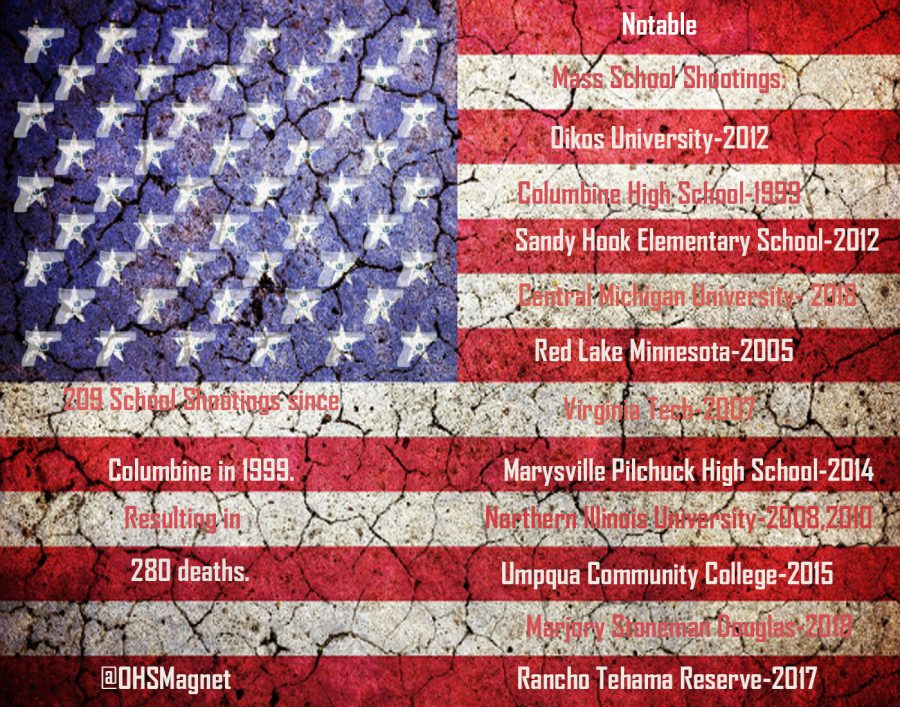 School shootings are becoming increasingly common, with some chilling statistics

The significant changes in school security continues to get stricter after each school shooting that takes place in the United States. Everytownresearch.org, a gun control advocacy group that tracks gun violence, recently completed new studies saying, “There have been 63 school shooting attacks since 2013.” The recent Parkland, Florida school shooting sparked the need for action rather than talk. Following the tragedy, student activists from Marjory

Stoneman Douglas High School created the movement Never Again, with the intention to advocate for stronger gun control. This movement organized marches, walkouts, protests and the social media hashtag #NeverAgain throughout the nation.

Evan Little, a sophomore at OHS, has the same fears as many students regarding the safety of school and the possibility of a shooting. Little said, “It is way too easy for someone to bring a weapon into the building. I think if the new lockdown protocol was implemented in drills, it would help diminish a lot of those fears.” The security of OHS became a top priority over the summer and is something administration is focused on continuing to improve. With that being said, many students may not be well informed of the improvements being made, freshman Sam Knoll said, “I am not aware of any such lockdown procedures. I think the school should do a better job of making security a topic of discussion.” There is no question that students across the country are worried about their own safety and look to the law enforcement, school administration and even politicians to help solve the puzzle.

In Washington D.C., the gun debate is still deadlocked with opposing side’s arguments, but affected individuals from shootings argue that action and change from our government needs to happen immediately to protect students.