Grass Roots of the bond referendum

Our number six story is actually two.  Magnet staff would is proud of the balanced coverage the staff did to try to balance the opinions of the community. 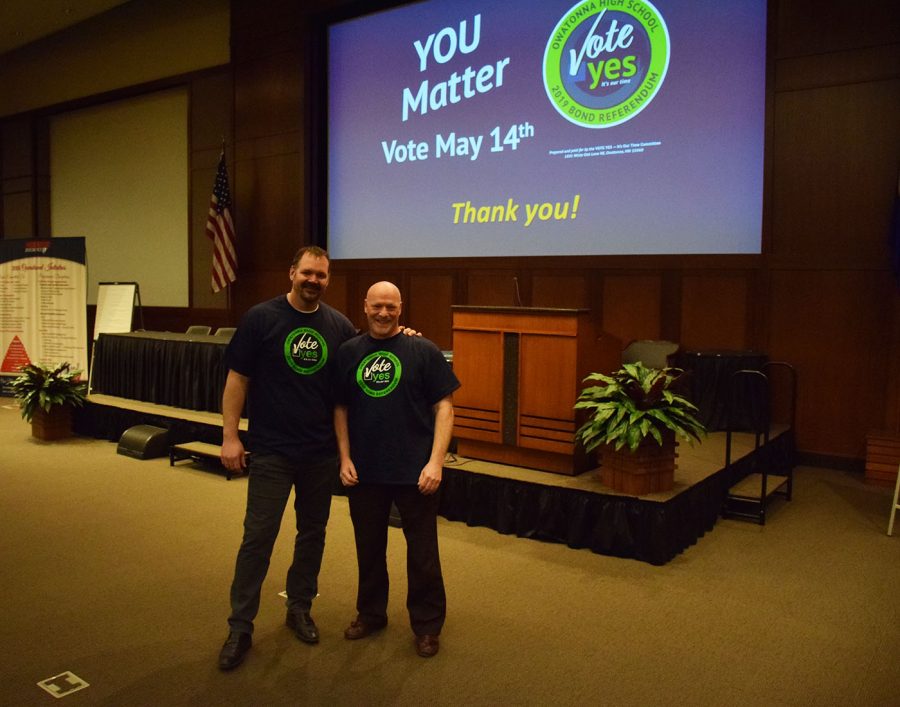 Seth Madole and Bob Rinaldi after their vote yes presentation

Editor’s Note: This is a two-part series of the grassroots organizations associated with the upcoming bond.

The Vote Yes committee has started its Ten-for-Ten Grassroots campaign to get voters to the poll. This campaign starts with one person naming ten yes voters, and then those ten finding ten more. They are hoping to have 10,000 yes votes the day of the vote, and they will be emailing yes voters, reminding them to vote on May, 14. If someone wants to join their campaign, they can scan a sheet of vote yes voters’ names, phone numbers or emails, and send it to [email protected]  Matt Kottke, one of the leaders of the Vote Yes committee, said, “As a 1977 graduate, I can still recall how meaningful it was for me to cast my first vote over 40 years ago, and I can’t encourage you enough to take advantage of the right that many of you now have to help shape the future of our school and our community.”

As a 1977 graduate, I can still recall how meaningful it was for me to cast my first vote over 40 years ago, and I can’t encourage you enough to take advantage of the right that many of you now have to help shape the future of our school and our community.

Some of the main points the Vote Yes committee make to support their side includes a long term solution if the money is not spent repairing this building over the next years(34 million this year), the price goes from 138 million to 147 million next year due to increased construction costs. Additionally, the possibility to lose over 22 million dollars from local businesses, would not help the OHS – which is in violation of many guidelines including Title IX. Kottke said, “The current OHS School Building has served our students, educators, and our community for nearly 100 years and we’ve gotten everything out of it that we possibly could, maybe more; however, the time has come when it doesn’t make economical sense to continue to pour more money in its upkeep if we truly aren’t making it any better.”

The committee is very active on social media on all platforms. They are routinely posting updates and more updates on Twitter, Facebook and Instagram. They also have a fundraising campaign through their Go Fund Me Page and are selling “Vote Yes” t-shirts. The shirts are available while supplies last at Courts Sports for $5 each.

The committee will meet next on April 29, at 6:30 p.m. in the Small Group Forum at OHS. This will be an informational meeting open to the public. For more information visit their web page.

Community gathers to vote no

Editor’s Note: This is a two-part series of the grassroots organizations associated with the upcoming bond.

Owatonna community members are voting for a new Owatonna High School building in the May 14, 2019 election. The Owatonna Public School Board has currently done open tours for the public to view the reasons for the consideration of a new building bond referendum. Many school officials and community members have different viewpoints on a new building. Factors like money, health, and functionality of the current building are the main arguments.

The Concerned Owatonnans for Public Education (COPE) group in Owatonna has met three times to spread the word on reasons why citizens should vote no to the school board bond referendum. In their presentation, they covered expense as one of the major reasons why the bond should not be approved. According to the information, COPE gathered from the Owatonna School Board, it would cost $116,700,00 to build the school, with an additional $127,000,000 in interest, totaling to $243,000,000. Not including farms, this bond would raise property taxes 11-15%, causing a financial issue within Steele County. COPE member, Marlene Nelson said, “I am personally a part of this group [COPE] because I do not want to see this town or county in debt.”

COPE has many other reasons why people should vote no in the May election. Since the high school was listed on the National Register of Historical places in 1986, Owatonna considers the school as a historical landmark. Members are concerned with the fewer opportunities children will have in transportation to a school out of downtown. Students will be limited with the inability to bike or walk to a school in the center of town. The school district is contemplating paying $18,000 an acre for 100 acres, however, according to the county assessor, the highest price for a 100-acre lot is $6,300 per acre.

Why would we support a school that is not meeting their academic criteria?”

Dale Fairbanks led the presentation and has been a part of COPE for 10 years. He is concerned about Owatonna losing their community feeling if the school is built outside of downtown. Fairbanks said, “Legally, once they approve the bond, they can do whatever they want with it.”

The student population has not grown in the past 10 years and is not expected to have a growth progression for the next 10 to 20 years.  The group referenced MCA test data. Currently, only 53% of students met the math standard, and 56% met the English standard. One COPE participant said, “Why would we support a school that is not meeting their academic criteria?”

The group is concerned about how Owatonna’s public image is affected by their academic standings, affordability and growth. In the meeting the group quoted the Owatonna People’s Press saying, there is approximately 180 homeless students attending OHS, and thousands who are on free or reduced lunches. This rise in taxes would push families into a money crunch, causing more students and parents not being able to afford food or a house.

COPE has currently six people in their steering committee and has had around 130 people attend their past three meetings. COPE has a goal to vote no on the bond, and instead spend money on reconfiguring the current high school and improve educational resources. The committee members plan on joining the school board task force to provide input and discuss the possible improvements of the current school. There are no upcoming events for the COPE group. Fairbanks and Nelson started a Go Fund Me page to support their efforts in reaching more people in the community to vote no.

Everybody involved in the ISD761 district can vote at the election on May 14, 2019, and polls will be open from 7 a.m. to 8 p.m. For more information, COPE has its own Facebook page and updates regularly.